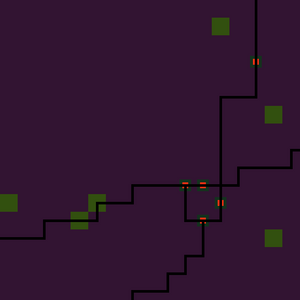 Mountain halls are the procedurally generated sites of the "deep dwarves", located far beneath the mountains. They can be accessed via down-stairs found in underground tunnels, but have no direct connection to the surface. These sites are found in the interior of mountain biomes at about the depth of the first cavern layer, and appear on maps with the symbol Ω. (Notice the contrast with fortresses, which appear along the edges of mountain ranges and connect to both the surface and the depths.)

A mountain hall complex typically spans a couple of levels, connected to the tunnel above by a 1x1 staircase. One level is a labyrinth of 2x2 bedrooms, which (in an inhabited hall) may contain beds, cabinets, and scattered clothing. The other level comprises large halls filled with smelters or forges. Overall, the pattern closely resembles a small section of the procedurally generated world-gen dwarf fortresses. A single map tile marked as a mountain hall site (Ω) may contain several such complexes along the length of the tunnel. As can be seen on the embark map, mountain hall sites (just like the sites of other races) can span an area nearly as large as, and not necessarily aligned with, a full region map tile.

These sites tend to be much less heavily populated than dwarf hillocks, but some civilian or off-duty military inhabitants can be found in the bedrooms or near the workshops. In addition, military dwarves will patrol the tunnel and cavern in the vicinity of the entrance stair -- in adventurer mode, meeting these may be your first indication of the presence nearby of a mountain hall.