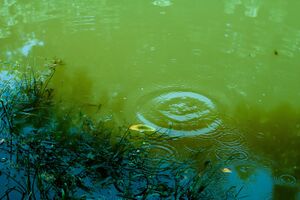 Murky pools are small bodies of stagnant water on the surface. Murky pools form tiny biomes that are enclosed by much larger biomes, which is to say that the pool itself and tiles adjacent to the pool are counted as a biome. All kinds of vermin populate pools, including many edible and hateable vermin (and other creatures, see Bugs). Murky pools won't be shown on the embark screen, but they are a very common feature in any non-desert non-freezing biome, and will usually appear in high numbers - some pools can be found merged with rivers.

Murky pools contain a finite amount of water that can be drained and replenished over time - it can evaporate completely during summer in sufficiently hot climates, and be slowly refilled by rainwater, or be artificially drained or filled up.

There are six types of pools, divided by climate and salinity of the water, listed in the following table:

Dwarves with the fishing labor enabled will catch vermin fish from nearby murky pools. Fish populations will run out very quickly, and can be easily fished to local extinction. "Murky pool" tiles cannot be created artificially, but for the purpose of fishing, all tiles will yield "murky pool" fish (e.g. turtles) unless they were originally part of a specific map feature (e.g. a river, a lake/ocean biome, or an underground cavern) when you embarked.

A murky pool can be used as a water source, but this is not recommended – drinking stagnant water will give dwarves an unhappy thought, and using it to wash wounds will lead to infection. Building a well will not clean the water, but filtering the stagnant water through a screw pump will, which can then flow into a dwarf-made cistern. Dwarves generally won't use stagnant water from murky pools if alcohol or clean water is available.

In order to remove a murky pool, you must first remove the water. There are several ways to achieve this:

The bottom of a murky pool will keep its "murky pool" status, presumably to let the game know that water should collect there during rain storms. You can't build certain buildings, including farm plots, on dry "murky pool" tiles. Murky pool tiles will also block trade depot access. To de-murk those tiles, simply build a paved road on top of them, and then remove it – the floor covered by the road will become standard soil once the road is removed. Be aware that once you do this, the tiles won't gather rainwater any more.

When murky pools thaw or freeze, they do so instantly. Any dwarf standing on the ice will plunge into the water, with a risk of drowning if they can not find a nearby ramp quickly enough. Unless they have adequate or better swimming skills, the fall will stun them, increasing the chance of death. If a dwarf is in a murky pool when winter comes (perhaps because the water is shallow enough to walk through) and the water freezes, the dwarf will be encased in the ice and immediately die. To reduce the chance of this happening, you can use traffic designations: mark the ice as restricted, and put a high traffic ring around the perimeter of the pool. Or, if you don't need to fish from it, you can construct a wall around it or a floor over it.