A dark green man with the distinct head of a toad.

Toad men are humanoid versions of the common toad and a species of unremarkable animal people. They currently cannot be encountered in-game due to a bug which prevents variations on pond-spawning vermin from being placed in the world.

If they were encounterable, however, they would be a bit over half the size of dwarves when adults and spawn in groups of 1-5 individuals, posing no threat to dwarves unless provoked. Like other savage animal people, toad men would occasionally join civilizations, becoming full-fledged citizens who could appear in your fortress as visitors, or historical figures, or be playable in adventurer mode. 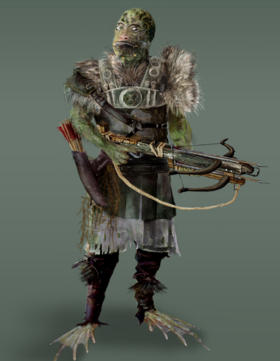