A large monster in the shape of a dragonfly.

Giant dragonflies are much larger versions of the standard vermin dragonfly. They cannot currently be encountered in any game mode, as they live only in murky pools, which are currently unable to spawn anything larger than vermin.

If they could actually be encountered, they wouldn't be useful for anything other than immediate butchering, as they have a maximum lifespan of one year like other giant insects. As they are not actually [BENIGN], wild ones would annoyingly interrupt your dwarves when spotted.

Some dwarves like giant dragonflies for their faceted eyes. 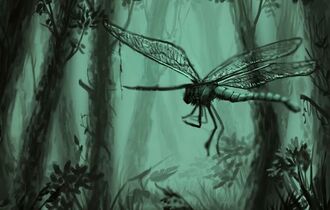 Are they still harmless to humans..?
Art by Dead Fox
Retrieved from "https://dwarffortresswiki.org/index.php?title=Giant_dragonfly&oldid=287697"
Categories:
Hidden category: