A person with the head and wings of a mosquito.

Mosquito men are humanoid versions of the common mosquito and a species of unremarkable animal people, found in most non-freezing savage biomes. They are a little over half the size of dwarves when adults and spawn in groups of 1-3 individuals. They should pose no threat unless provoked. All mosquito men possess Legendary skill in climbing.

Like other savage animal people, mosquito men may occasionally join civilizations, becoming full-fledged citizens who may appear in your fortress as visitors or be playable in adventurer mode.

Some dwarves like mosquito men for their high-pitched buzz and their ability to feast on blood. 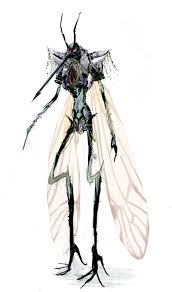 Also known as lawyers, these parasites can quickly bleed a fortress dry with lawsuits, court fees and general bloodsucking. This makes them ideal test subjects for dwarven science.

Curiously, mosquito men will occasionally visit your fort in caravans. However, they have only been observed to offer one human doctor, two human bandits, and one human wearing a steel mask with high physical attributes. While you have to buy the doctor, there is no charge for the other three.

Contrary to popular belief, mosquito men are quite small.