A person with the shell and head of a snapping turtle.

Snapping turtle men are animal people variants of the common snapping turtle, who can be found in savage temperate lakes and rivers. They spawn in groups of 1-5 individuals and are possibly aggressive, attacking dwarves who attempt to provoke them. In terms of size, they are only a little smaller than a dwarf, which makes them potentially dangerous if confronted by unarmed civilians.

Like other savage animal people, snapping turtle men can join civilizations, become historical figures, appear as visitors and be playable in adventurer mode.

Some dwarves like snapping turtle men for their powerful bites and their long necks.

They are well known for their skill as ambushers. They will often congregate under the leadership of a giant rat with a stick in the sewers of human cities. 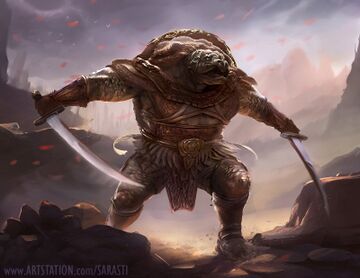 Its bark is much less worse than its snap.
Art by Salasti
Retrieved from "https://dwarffortresswiki.org/index.php?title=Snapping_turtle_man&oldid=287757"
Categories:
Hidden categories: