Giant beavers are the giant animal variant of the common beaver, found in savage temperate lakes and rivers where they appear in groups of 3-10 individuals. They are roughly five times the size of a dwarf, but are generally benign and content to simply meander their territory. If confronted, however, they may fight back and make quick work out of inexperienced warriors.

Giant beavers can be captured in cage traps and trained into exotic pets, possessing the standard giant creature value. They provide plenty of meat and bones when butchered, making them useful as potential livestock. Like other giant animals, giant beavers are exotic mounts.

Some dwarves like beavers for their dams and their tree-felling habits.

An animal often called a 'Giant Beaver' lived in Ice Age North America. Castoroides was the size of a black bear. However, the DF Giant Beaver is much bigger than Castoroides. For some reason, Castoroides has never appeared in the Ice Age movie franchise. 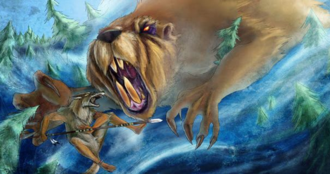