A person with the head and wings of an osprey.

Osprey men are animal people variants of the common osprey, who inhabit savage water-heavy biomes. They spawn in groups of anywhere between 1-5 individuals and are generally content to keep to themselves. In terms of size, they are a little over half the weight of the average dwarf. All osprey men are born with Legendary skill in climbing.

Like other savage animal people, osprey men can join civilizations, become historical figures, appear as visitors and be playable in adventurer mode.

Osprey women inside your civilization can lay eggs inside a nest box.

Some dwarves like osprey men for their fishing ability.

Osprey people are flightless birds, but according to research by a certain bearded bastard dwarf, Osprey people like to hang atop trees and high buildings until they die of dehydration or starvation, perhaps in a ritual to ascend into the ranks of the flying ones high above their flightless plane of existence, in hopes that they might soar the skies freely once again as their ancestors once did, this particular religious ritual is called the ascension, but it's best known as a lack of AI. 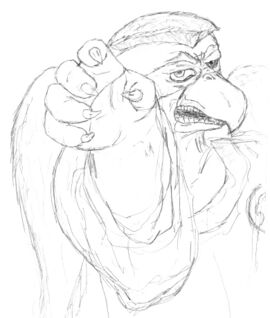