A humanoid with the head, tail and poison spurs of a platypus.

Platypus men are animal people variants of the common platypus who can be found in savage rivers. They spawn in groups of 5-10 individuals and are generally content to keep to themselves. Like the common animal, platypus men can inject poison via kick attacks which causes considerable pain and swelling on the victim, while platypus women lack this ability entirely. In terms of size, they are a little over half the weight of the average dwarf.

Like other savage animal people, platypus men can join civilizations, become historical figures, appear as visitors and be playable in adventurer mode.

Some dwarves like platypus men for their bizarre appearance, their venomous spurs, their flat tails, and their large bills.

Contrary to popular rumors, there are no records of any civilization having ever recruited platypus men as agents. 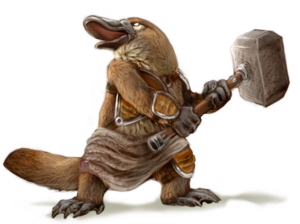