Sturgeons are a species of massive fish who can be found in temperate and arctic oceans, as well as temperate rivers. At one and a half tons, they're the largest species of Osteichthyes fish (fish with skeletons made of bone rather than cartilage) in the game, tied with hippos as the largest mundane animals found in freshwater. Due to their giant size, they provide a great amount of returns when butchered. As non-vermin fish, sturgeons can't be fished by fisherdwarves, but can be caught with the use of a drowning chamber. Infant sturgeons are called sturgeon fry.

Sturgeons are benign, but if confronted, may very easily kill a dwarf or adventurer in adventurer mode. Their massive size indicates they are specifically based on the beluga, the largest species of sturgeon. 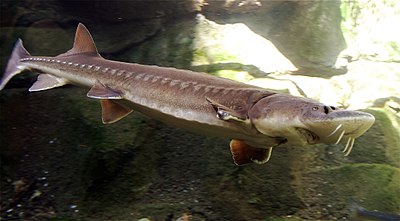