A person with the head and tail of a saltwater crocodile.

Saltwater crocodile men are humanoid versions of the common saltwater crocodile and a species of animal people, found in savage tropical wetlands. Their most remarkable trait is their great size; they are over seven times the size of a dwarf and can make quick work of civilians and sometimes inexperienced military squads due to their aggressiveness, meaning caution should be taken when they are wandering through the map.

Like other savage animal people, saltwater crocodile men may occasionally join civilizations, becoming full-fledged citizens who may appear in your fortress as visitors or be playable in adventurer mode. Due to being based on the raw files of the normal animal, they lack the ability to jump.

Some dwarves like saltwater crocodile men for their strength.

Crocodile men are often known to favor using large, two-handed bladed weapons in combat. They are also known for their apparent hatred of Jackal Men, who they will go to great lengths to kill. The reason behind this hatred is currently unclear to Dwarven scholars.

Despite popular belief, crocodile men are not interested in computer rooms.

Murderous saltwater crocodile men (but not women) have been known to make their homes in sewers, feast on human flesh, and occasionally fight with bat men. 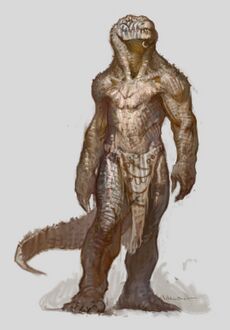