A person with the head and tail of an alligator.

Alligator men are humanoid versions of the common alligator and a species of animal people, found in savage swamps and rivers. They are nearly 4 times bigger than dwarves when adults and spawn in groups of 1-3 individuals, and as such make potentially dangerous opponents to the average unarmed civilian. Approach them with caution.

Like other savage animal people, alligator men may occasionally join civilizations, becoming full-fledged citizens who may appear in your fortress as visitors or be playable in adventurer mode. Due to being based on the raw files of the normal animal, they lack the ability to jump. 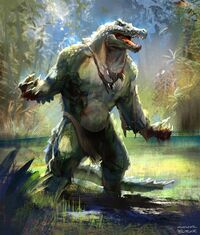 Be wary around alligator women, for they are known for biting the legs of careless dwarves in taverns.