A person in the form of a sponge with arms and legs.

Sponge men are humanoid versions of the common sponge and a species of animal people, found in most savage bodies of water. They are exactly as large as a dwarf and spawn in groups of 1-3 individuals. Because they are made of sponge tissue, they are incredibly fragile (even more so than normal sponges due to having many body parts to attack), making them harmless to all but the most unlucky of dwarves. Sponge men don't need to eat, drink or sleep to survive and are born as full-sized adults, never going through any growth during their lives.

Some dwarves like sponge men for their squishy texture. 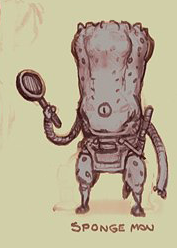 "F" is for friends who do stuff together!"
Art by Arne

Sponge men are often known for wearing, unusually for an animal, trousers. Said trousers are often, even more unusually, square. They are known for their piercing, demonic laughter, and inability to commandeer a wagon. They are often at odds with squid men, although they are rarely aware of the fact. Sponge men tend to come under the employment of crab men, usually working in kitchens.