A huge monster in the shape of an alligator.

Giant alligators are immense counterparts of the common alligator found in many savage rivers and swamps. They are over 8 times bigger than their normal cousins, making them over 54 times more massive than a dwarf; straying too close to these beasts will lead to your civilians being reduced to mincemeat. If confronted by giant alligators, a competent military and traps are a must. Take caution when fighting them near water, however, as they may cause dwarves to fall into it, where death by drowning is all but inevitable, if the alligator doesn't outright murder them.

While dangerous, giant alligators may be more valuable alive than dead. While their pet value is actually lower than that of their normal counterparts (500 vs 650), if the player manages to capture and train them, giant alligators make some of the best egg-layers in the whole game; they possess all the good things about normal alligators combined with being much larger, meaning they give many more returns when butchered. A giant alligator farm will provide a fortress with food, valuable crafting materials and a force of big, mean, water-dwelling defenders. 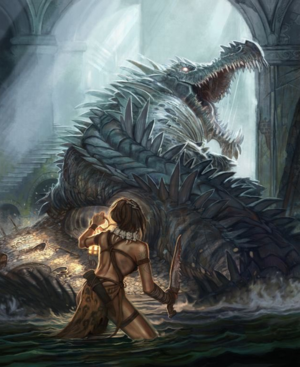 What part of "No Swimming!" was not clear on the sign?
Retrieved from "https://dwarffortresswiki.org/index.php?title=Giant_alligator&oldid=287674"
Categories:
Hidden category: