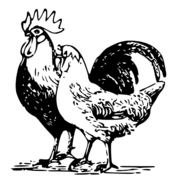 Egg production, like the meat industry, beekeeping industry, fishing industry, and farming, creates food. In egg production, collection and cooking of eggs is the primary activity, as, over time, domestic poultry, such as chickens, can produce much more food as eggs than the same animal produces as meat when butchered (1 egg = 1 meat = 1 meal). When starting out a new fortress, raising poultry can be an excellent way to quickly fill up your food barrels as it requires very little set-up for your dwarves. As a by-product of egg production, older or excess animals can be butchered as part of the meat industry.

There are several sources for obtaining egg-laying animals, outlined below.

You can buy domestic poultry at embark and even decide how many males and females of each animal you embark with. Since you don't need males to produce eggs, and need only one male to breed, you could embark with three or four hens, and a single rooster. Poultry animals are very economical to purchase at embark, costing only 6☼ each.

Of the domestic poultry, turkeys produce the most eggs per clutch on average, followed by ducks, then chickens and guineafowl. Turkeys are also the largest poultry animals, and produce the most meat and other products if butchered as part of the meat industry, with geese and blue peafowl only slightly smaller. All domestic poultry become adults one year after hatching, but geese, blue peafowl, and guineafowl grow to full size at one year; other poultry only reach full size after two years.

Domestic poultry may arrive at your fortress with a wave of migrants. These animals may be strays or pets.

Requires: A trade depot, a trader, a merchant, and some tradeable goods

It is also possible to catch egg-laying animals through judicious use of cage traps. This, of course, involves building cage traps where these animals will walk or fly. Once they are trapped the caged animal (or invader) will be delivered to an animal stockpile and the trap will be reset with a fresh cage.

Cage traps should be built where animals will walk, not where they are when you decide to trap them. Any dwarves sent out to create and arm traps in the animals' midst will scare them away, or trigger their aggression. To successfully trap large animals, form a choke point some distance away from them: build walls, perhaps several z-levels high, to create a continuous barrier to movement.

Leave a small gap one or two tiles wide (depending on how many of the critters you want to trap) and build your cage traps there. If the animals haven't moved off or been scared off by the time you're done, and they're docile enough to not attack once they see your dwarves, use military orders to send a dwarf (or several) around behind the animals and herd them toward the choke point.

Note also that cage traps cannot be built within a certain number of tiles of the map edge, so when planning your funnels and choke points, be sure to leave four or five tiles as a buffer zone.

What wild egg-layers are available depends highly on the biome. In general, most maps have flying birds of one kind or another, but they tend to stay up in the air, where cage traps can't get them. Several underground creatures are egg-layers, and as such are available on every map, such as the crundle, elk bird or the rare and dangerous jabberer.

Egg-laying animals that are caught in a cage trap need to be tamed by an animal trainer at an animal training zone before they can be safely used to produce eggs. Note that you are not limited to standard domestic poultry; some of the most lucrative and prolific egg-layers are reptiles.

Requires: One or more adult females and one adult male of each species, one or more nest boxes, and time

A fertilized clutch will only hatch if they are left in the nest box undisturbed and their mother is allowed to incubate the eggs. Collecting the eggs, slaughtering or training the mother, or deconstructing the nest box will all prevent the eggs from hatching. A clutch of eggs to be used for breeding should be forbidden to prevent their collection. Even if the eggs and mother are left undisturbed, it is possible that clutch was not fertilized. Eggs that don't hatch after two seasons will likely never hatch. To make sure that the eggs are left undisturbed, make sure that no stockpiles accept that type of egg, and if you cook any meals make sure that that type of egg is turned off in the kitchen sub-screen of the status screen. Alternatively, you can put the nest boxes in a room behind a door and forbid the door to keep your dwarves away from the eggs.

As a large number of free-roaming animals will reduce your game speed, a common strategy is to cage all your young poultry until they mature. Keep in mind, though, that some tamed wild species take more than a year to mature, unlike most domestic animals. For example, it may be excusable to butcher a saltwater crocodile hatchling right away, rather than wait 3 years for it to mature and produce more meat and bones.

Using cage traps judiciously (or taking advantage of the animals elves trade) can sometimes snag you a breeding pair of a wild animal. Tame something unusual and start something crazy, like a cave crocodile farm!

Through the use of expeditions, a player can capture animals not otherwise available. For example, raiding a goblin settlement may yield beak dogs which, curiously, lay eggs.

Once you have at least one tame adult female egg-laying animal, you need to build a nest box to begin production of delicious and filling eggs. Every so often, the adult females will claim a nest box and lay a clutch of eggs. Then, a food hauler will collect the eggs and move them to a food stockpile. Food hauling is an unskilled labor, so any dwarf in the fortress can do it. Egg collection is a great way to use those peasants that otherwise just move boulders around the fortress.

Eggs must be cooked into prepared meals at a kitchen before they can be eaten by dwarves.

* Animal people cannot be tamed, but they can join civilizations during worldgen and later arrive as visitors.
** Egg size does not currently affect food quantity.'

Aquatic egg-laying animals will not claim a nest box. It doesn't matter if the box is built underwater or on land. Bug:4105