A huge beast in the form of a gila monster.

Giant gila monsters are over one hundred times larger than normal gila monsters and produce more food - sadly, not 100 times as much food. Gila monsters lie between a tiger and a lion in size, and are not aggressive, so can be hunted for food: they do have a mostly harmless bite however, causing mild pain and swelling. They only appear one a time, however, and so cannot easily be made into the founding members of an exotic egg farm. Some dwarves prefer them for their "venomous bite" and "coloration".

Giant Gila Monsters were thought not to exist until a gripping film of an attack in the American midwest in 1959 revealed that they did exist and that they look an awful lot like regular Gila Monsters crawling on a model train set. 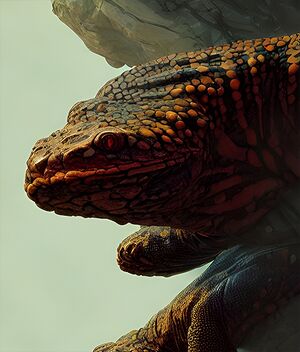