A large flightless bird that runs through the savanna. It has a long neck and legs.

Ostriches are flightless birds who inhabit deserts, tropical savannas and tropical grasslands, appearing in groups of anywhere between 1-10 individuals. They are a half again as large as the average dwarf but are completely benign, doing little but meandering the area cluelessly. The sprite for ostriches will have black feathers for males, and greyish-brown feathers for females. They will normally flee when attacked, but if enraged they may attempt to defend themselves, preferably with kick attacks. Male ostriches are called ostrich cocks, while females are called ostrich hens.

Ostriches can be captured in cage traps and trained into pets. They produce a good quantity of products when butchered and lay a fairly high amount of eggs if placed in a nest box; these traits combine to make them good choices to serve as the basis for egg production and a meat industry. Among the large ratite birds in the game (ostriches, emus and cassowaries), ostriches are by far the largest, though they may not live as long as a cassowary. Ostriches appear to be the smallest creature to yield either feathers or gizzard stones when butchered.

Some dwarves like ostriches for their long necks and their giant eggs. 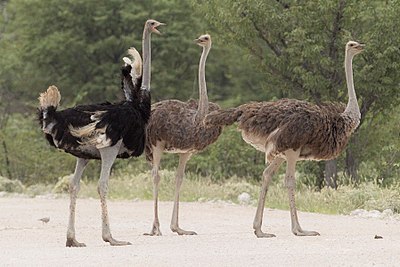