A person with the arms and wings of a barn owl.

Barn owl men are humanoid versions of the common barn owl and a species of unremarkable animal people, found in a wide variety of savage biomes. They are a little over half the size of an adult dwarf and spawn in groups of 5-10 individuals, who are unlikely to pose any danger to your fortress unless provoked. All barn owl men are born with Legendary skill in climbing.

Like other savage animal people, barn owl men may occasionally join civilizations, becoming full-fledged citizens who may appear in your fortress as visitors or be playable in adventurer mode.

Some dwarves like barn owl men for their coloration. 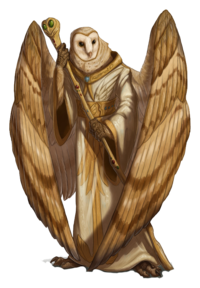 Sleeps during the day, but blames it on his owl DNA. Not his laziness.

Despite some myths and tales told by humans to their young, barn owl men have not been observed to be any wiser than other creatures, though their natural attraction to museums and scholarly careers may lead one to believe such a thing is true, especially when said owls blather on incessantly about whatever artifact is brought up in a conversation.