This is a medium-sized creature with legs and arms, but the long neck and head of an ostrich.

Ostrich men are animal people variants of the common ostrich who inhabit savage deserts and some tropical grasslands. They spawn in groups of anywhere between 5-10 individuals and are generally content to keep to themselves. In terms of size, they are a little bigger than the average human. Like standard ostriches, the sprite for male ostrich men will have black feathers, with ostrich women having greyish-brown feathers.

Like other savage animal people, ostrich men can join civilizations, become historical figures, appear as visitors and be playable in adventurer mode.

Some dwarves like ostrich men for their long necks and their giant eggs. 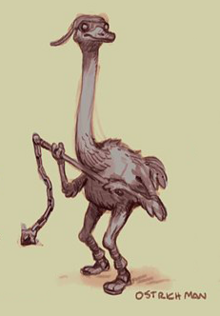