A huge monster in the form of an eagle.

Giant eagles are the over-sized version of eagles, found in the same wide array of biomes. They can be extremely annoying to an early fortress due to their ability to fly over your fortress defenses and kill your unarmed civilians. Unlike other aerial pests, giant eagles will generally not path into your fortress, and usually only attack if provoked. They may also appear as mounts during a siege, resulting in a highly-maneuverable and dangerous squad of attackers.

Captured giant eagles may be kept as exotic pets, requiring substantial time and effort to tame. Unfortunately, they cannot be trained to increase their combat effectiveness. Elven caravans may offer to trade tame giant eagles if the elven civilization is situated in a mountainous area.

Giant eagles are relatively useless for egg production thanks to their small clutch sizes, but they are a viable choice for your meat industry, yielding a respectable amount of food without grazing. Their eggs take approximately six months of game time to hatch; if the eggs haven't hatched in seven months, then something has gone wrong – either they weren't fertilized, the mother was forced out of the nest box, your fort has hit a cap on total animals, or something else – and you'll need to remove those eggs to allow more to be laid. Once hatched, giant eagle hatchlings take roughly one year to reach adulthood.

There is a current bug where tamed animals that have the [FLYING] tag won't actually fly. Once tamed, your giant eagles will remain earthbound and never take to the sky, which makes them somewhat less deadly than they would otherwise be. 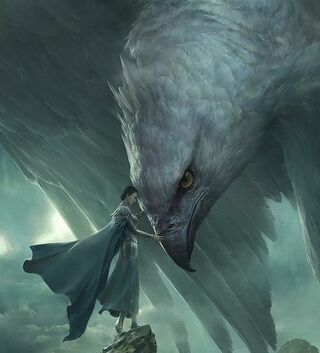 Through the use of the latest magma-powered and minecart-driven science, we have solved the riddle of whether a dwarf carrying a ◄gold ring► can be flown to a volcano to dispose of said ring. It cannot.