A small person with the head and wings of a crow.

Crow men are animal people variants of the common crow who inhabit a variety of savage temperate biomes as well as taigas. They spawn in groups of anywhere between 5-10 individuals and are generally content to keep to themselves. In terms of size, they are a little over half the weight of the average dwarf. All crow men are born with Legendary skill in climbing.

Like other savage animal people, crow men can join civilizations, become historical figures, appear as visitors and be playable in adventurer mode.

As the crow man flies is a common expression among some human cultures, as most crow men they see seem to know exactly where they're going after a couple weeks, and won't stop even for inconvenient and negligible annoyances. 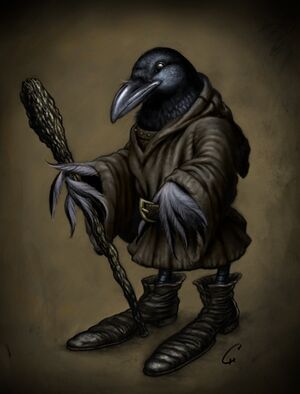