Hens will lay between 4-15 eggs when provided with a nest box. A rooster is required to fertilize the eggs, but fertilization is not guaranteed. Once hatched, chicks will grow into adults in 1 year.

Economically speaking, eggs are a very good source of food (1 egg = 1 meal) - starting out with 5 hens and roosters on embark is an easy way to keep a new fortress fed until larger scale food production can be established. Long-term, egg production remains a viable food industry, though other domestic birds (such as turkeys) produce more eggs and meat.

Most fortresses will collect the eggs as fast as they are laid, but this will prevent expanding your chicken population. To deliberately expand the population (and provide chickens for a meat industry), simply forbid one or more stacks of eggs by pressing t, select a nest box in use and press f to forbid the eggs from being collected. Alternatively, deny your dwarves access to the nest boxes with locked doors. Be warned that large groups of chickens will require a significant amount of space for them to roam, otherwise they will quickly get into fights; additionally, failing to collect eggs may rapidly lead to a chicksplosion.

Some dwarves like chickens for their clucking and their scratching. 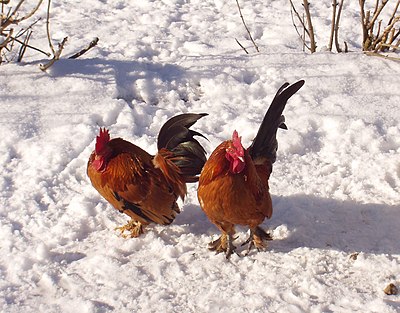 Admired for its clucking.

For some reason, roosters give a skull more often than anything else; this may be because the butcher holds them by the throat when cutting. It's a well-known fact that chickens can run even after being beheaded. For more info, see the domestic animals' page.

Chickens are often observed crossing roads, with scholars speculating about their motivations.