Emus are birds who inhabit temperate shrublands and forests, appearing in groups of anywhere between 2-10 individuals. They are half the size of a human (a little over half the size of an adult dwarf) and are entirely benign, doing little but meander about aimlessly. They'll normally flee if confronted in combat, but in rare occasions may attempt to defend themselves primarily with kick attacks.

Emus can be captured in cage traps and trained into exotic pets. They produce a good quantity of returns when butchered and lay a fairly high amount of eggs if placed in a nest box, opening the opportunity for an emu farm. Among the ratite birds in the game (emus, ostriches and cassowaries), emus are the smallest and shortest lived of the three.

Some dwarves like emus for their size and their inquisitive nature. 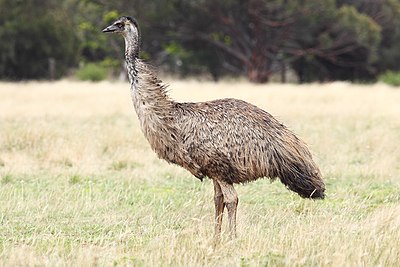 Admired for their inquisitive nature.

One human kingdom is historically famed for losing a bloody war against emus, despite having the reputation of wrestling saltwater crocodiles into the ground and killing dingoes with their bare hands. They handled the loss fairly well, however, considering they love to joke about it to their dwarf friends. Another proof that humans are much better than those damned elves.