A large white snake with the arms and torso of a man. These creatures are evil and live far underground.

Serpent men are one of the many underworld tribal creatures (animal people, per se, but design choices apparently voided them of that status) living on any cavern level milling around piles of meat and tanned hides. They stand at roughly the size of an adult dwarf.

Like many underground races, the danger of serpent men is not to be found in their wooden weapons, but the substances found smeared on them. That is to say, serpent men use many poisons, some of which can be deadly. They will launch group attacks on your fort, or swim through your reservoirs and launch amphibious assaults on your fisherdwarves. Additionally, serpent men possess a poisonous bite which paralyzes enemies, making them vulnerable to suffocation, as well as other attacks from other serpent men, while serpent men themselves are completely immune to paralysis. Despite their description, they do not possess the [EVIL] token and are not any more malevolent than any other race of animal people.

If you ssspeak to a ssserpent man in adventure mode, they will talk like thisss, becaussse of the [LISP] token.

Some dwarves like serpent men for their impressive tails. 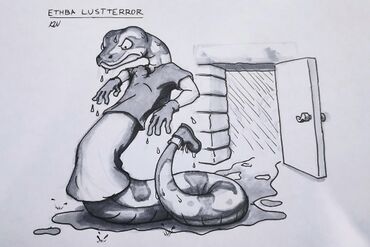