A huge monster in the form of a buzzard.

Giant buzzards are huge cousins of the normal buzzard who can be found in many temperate and desert savage biomes. While their smaller cousins do little more than spam cancelled jobs, giant buzzards prove to be a genuine threat to a budding fortress - standing 149 times larger than a normal buzzard, these monsters possess all the annoyance of their normal counterparts and are equally prone to stealing your food if they can reach it, and unlike their regular counterparts, they are not beyond confronting your dwarves should they get in the way. Nonetheless, as the fortress grows, a squad of marksdwarves can make quick worth of the creatures, provided they can hit them (and they probably can't, cue job cancel spam). They are considered exotic mounts, so you may see elves riding them into battle in the event of a siege.

Like their equally ugly smaller versions, giant buzzards can be captured with cage traps and tamed into pets, either for a zoo or for egg production. However, as they only lay 2 to 3 eggs at a time, their performance is lacking. Giant buzzards do provide a respectable amount of meat and bones when butchered thanks to their great size, should the player choose to farm them for food in revenge for them stealing their own earlier in the fort's history.

Some dwarves like giant buzzards for their striking red face. 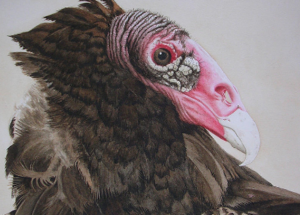