A huge monster in the form of a bluejay.

Giant bluejays are the giant version of blue jays, who appear in savage temperate biomes. While each giant bluejay is bigger than a grizzly bear, and they appear in flocks of 5-10 individuals, they pose little threat to your fortress, mostly flying idly over it in the skies.

If you get your marksdwarves to shoot them down or manage to catch one, they give a decent amount of meat, bone, fat, and edible organs, though nothing spectacular. A female giant bluejay lays clusters of 2-7 eggs, which makes them a worse alternative for egg production than all the common domestic poultry, but a better choice for the meat industry as they grow even quicker than both chickens and turkeys, but reach a much bigger size.

Giant bluejays can be tamed and sold by elves, and mounted by them in sieges.

Some dwarves like giant blue jays for their coloration. 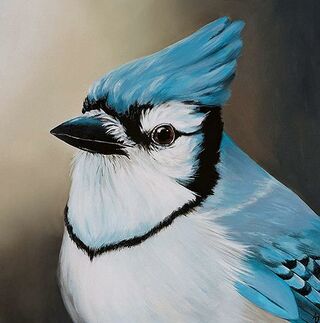 So big that some dwarves mistake one for half the sky.
Art by GreenBox Art
Retrieved from "https://dwarffortresswiki.org/index.php?title=Giant_bluejay&oldid=285302"
Categories:
Hidden category: