The most intelligent of birds. It can be found in the rainforest.

Grey parrots are birds who may be found exclusively in tropical most broadleaf forests, where they appear in groups of 3-5 individuals. They do little but fly about aimlessly and are among the smallest creatures in the game who aren't vermin, making them entirely harmless to dwarves. Due to their tiny size, a hunted grey parrot won't be butcherable. All grey parrots are born with Legendary skill in climbing.

Grey parrots may be captured in cage traps and trained into cheap exotic pets. Trying to butcher a trained parrot will only yield a skull in return, making them useless for a meat industry, and they lay considerably less eggs than the average domestic bird. However, they are among the longest living animals found in the wild, meaning if your dwarves adopt them, they're going to last for several decades.

Some dwarves like grey parrots for their intelligence and their social nature. 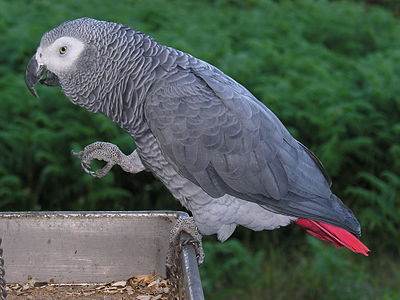 Dwarven scholars debate over the true color of Grey Parrots. Traditionalists insist that grey parrots are grey, although some debate exists over whether they are gray instead. Another common argument (usually made in an attempt to annoy a diplomat by occupying the mayor for a few extra months) is that, according to the humans, grey parrots should be called lgray parrots instead. Even more radical dwarves insist on calling them 7:0:0 parrots, but this is too easily confused with the pet value of giant cave swallows to be widely accepted. Parrots are often found in a non-living state, often when sold, and this may cause a tantrum with the offended dwarf exclaiming "This is an ex-parrot!"