Not to be confused with crows.

A small, foreboding black bird that feeds on carrion. It is social, very intelligent, and knows how to use tools.

Ravens are small and very common birds who are found in almost all biomes in the game, where they appear in flocks of anywhere between 2-10 individuals. They are benign and do little but fly across the area aimlessly, rarely if ever paying mind to dwarves or other creatures, and even if they attack, they are unable to deal any significant damage to anything with so much as clothes on. Due to their tiny size, they are not butcherable if killed by a hunter. All ravens are born with Legendary skill in climbing.

Ravens can be captured in cage traps and trained into cheap pets. They are useless for a meat industry due to giving nothing but a skull if trained and butchered, but can be a minor source of eggs (who are nonetheless surpassed by all domestic birds). 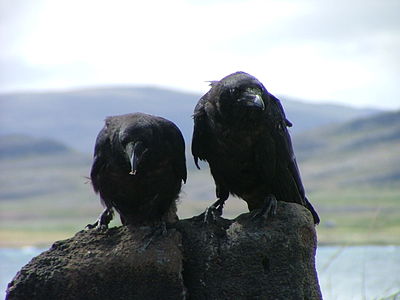 Ravens have a decent pet value, though they sometimes have the disconcerting habit of tapping on your chamber doors.

Also, a high-ranking female Noble may require a tower full of ravens to keep as a symbol of her nobility. To satisfy her request, make sure you devoid the tower of any mean of escape, and only use the magnificent wild ravens (or even better, giant wild ravens). She will appreciate it.

Despite what insane hat crafters may say, a raven is completely unlike a writing desk.

Note that testing has proven that in reanimating evil biomes, undead raven swarms can absolutely live up to their grim reputation. Necromancers or evil biome revivifying ravens, even without being giant, are existential threats to a whole fortress, as are nearly any mid-to-large size flyer.