A large monster in the shape of a chameleon.

Giant chameleons are the much larger savage counterparts of the chameleon, found in a variety of biomes including deserts and tropical forests. They are 1340 times larger than their vermin equivalents, or over 3 times the size of the average dwarf. Giant chameleons spawn one at a time, wandering through the biome and generally minding their own business. Due to their size, they can easily kill a civilian if provoked, but they should prove no big threat to a crossbow-wielding hunter or a military squad. All giant chameleons possess Legendary skill in climbing.

Giant chameleons are tied with giant iguanas as the second best egg-layers of all above-ground creatures (losing only to the giant saltwater crocodile), a trait carried over from their vermin counterparts. They lay 40 to 50 eggs at a time, which makes them one of the best creatures for egg production in the game. They also possess the standard high pet value of all giant creatures, which makes them valuable pets.

Unlike most reptile hatchlings which are tiny compared to their adult forms, giant chameleons hatch fully-grown. If you can acquire a breeding pair then a single clutch of eggs can produce over 800 meat, making them ideal for the meat industry or unleashing scaly hordes upon goblin intruders, assuming the fortress survives the ensuing iguanasplosion.

Some dwarves like giant chameleons for their ability to change color and their eyes. 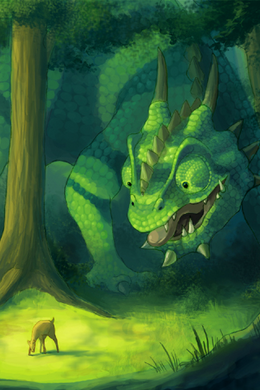 Can disguise itself as entire forests.
Retrieved from "https://dwarffortresswiki.org/index.php?title=Giant_chameleon&oldid=285312"
Categories:
Hidden category: