A person with the head and wings of a cardinal.

Cardinal men are animal people variants of the common cardinal who inhabit a number of savage temperate biomes. They spawn in groups of anywhere between 5-10 individuals and are generally content to keep to themselves. In terms of size, they are little over half the weight of the average dwarf. All cardinal men are born with Legendary skill in climbing.

Like other savage animal people, cardinal men can join civilizations, become historical figures, appear as visitors and be playable in adventurer mode.

Cardinal men, despite popular belief, do not elect religious leaders. 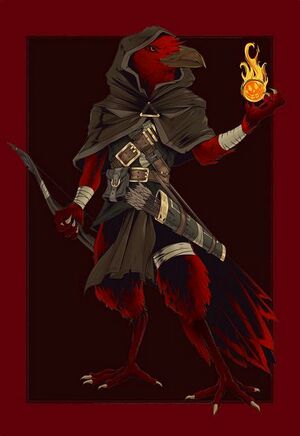 The feathers almost sparkle at you.
Art by Codaine420
Retrieved from "https://dwarffortresswiki.org/index.php?title=Cardinal_man&oldid=284861"
Categories:
Hidden categories: