A huge monster in the form of a vulture.

Giant vultures are enlarged cousins of the common vulture, found in savage deserts and some tropical plains. While their smaller counterparts usually do little more than cause job cancellation spam and fly off with a plump helmet sometimes, giant vultures are considerably more dangerous; not only do they retain the habit of stealing food, they are over four times the size of a dwarf and can be deadly to civilians who try to stop them during their thieving dives into your supplies (all while still causing lots of job cancellation spam). This makes them a real threat to a young savage embark, and if there are giant vultures in the region, the player should consider taking their food underground as soon as possible.

Like their small cousins, one can capture giant vultures with cage traps and train them into pets, who possess the standard high value of a giant creature. They are not any better than normal vultures when it comes to laying eggs, though they are comparably much better for a meat industry as they create a much higher quantity of meat, bones and fat. Giant vultures are also exotic mounts, so you may see elves riding them into battle in the event of a siege. 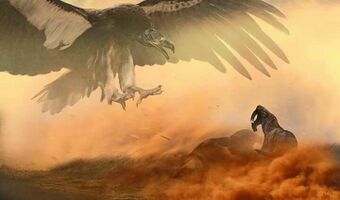 ×4 the size. ×8 the danger.
Retrieved from "https://dwarffortresswiki.org/index.php?title=Giant_vulture&oldid=285681"
Categories:
Hidden category: