A person in the form of a large black mamba with arms.

Black mamba men are the animal people versions of black mambas, half-man, half-snake. Unlike their solitary basal creatures, they can appear in packs of up to 3. Their venom is just as deadly as their smaller cousins', able to paralyse and kill a dwarf quickly, and causes great pain and unconsciousness. Since they appear in packs, they are unbelievably dangerous if they begin biting. They can use equipment and will not bite if armed with a weapon.

They're slightly larger than a dwarven child, and not nearly so threatening as the giant black mambas, as they lack the size to bite off entire limbs like the giant version often does.

Because of their deadly bite, black mamba men should be left alone if possible. Use ranged weapons as much as possible to avoid bites, and make sure any dwarf you send into melee is well-armoured to lessen the chance a bite will actually reach flesh to inject venom.

Some dwarves like black mamba men for their deadly bite and their aggression. 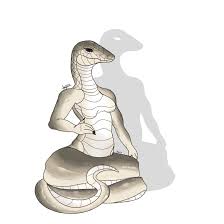 Black mamba men are especially noted for their competitiveness, their intensity, and their dedication to winning.

Some black mamba women are known to be incredibly vengeful, hunting down those that wrong them with a ☼steel long sword☼ and their Legendary striking skill. For this reason, it's ill-advised to interrupt a black mamba woman's wedding.