A person with the head and wings of a kestrel.

Kestrel men are animal people variants of the common kestrel, who inhabit a variety of savage regions. They spawn in groups of anywhere between 1-5 individuals and are generally content to keep to themselves. In terms of size, they are a little over half the weight of the average dwarf. All kestrel men are born with Legendary skill in climbing.

Like other savage animal people, kestrel men can join civilizations, become historical figures, appear as visitors and be playable in adventurer mode.

Some dwarves like kestrel men for their coloration and their hunting prowess. 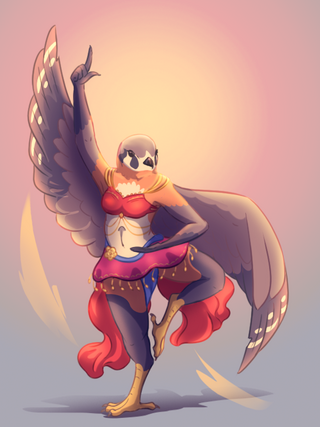 Such grace! Such poise!
Art by Kaivris
Retrieved from "https://dwarffortresswiki.org/index.php?title=Kestrel_man&oldid=286175"
Categories:
Hidden category: