A person with the head and wings of a peregrine falcon.

Like other savage animal people, peregrine falcon men may occasionally join civilizations, becoming full-fledged citizens who may appear in your fortress as visitors or be playable in adventurer mode. Their incredible flight speed makes them an attractive choice for an adventurer when flight speed is a priority.

Some dwarves like peregrine falcon men for their ability to dive through the air.

When engaged in combat, peregrine falcon men will demand their foes "Come on!" and "Show me your moves!" at any given opportunity. Their preferable style of combat is throwing punches of immense strength at their unfortunate opponent. 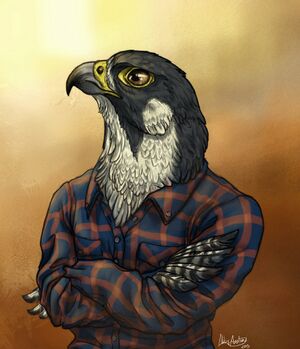