A large monster in the shape of an echidna.

Larger version of the echidna which elves will sometimes bring to trade. Like its smaller counterpart, a giant echidna will lay an egg in a nest box. Their clutch size is 1, so breeding them can take a while. They cannot be trained into war or hunting animals. 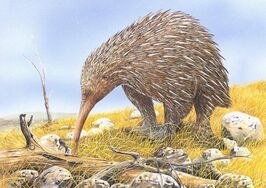 Still has a craving for ants.