A small, brightly-colored snake. It is known for eating other snakes and being mistaken for its venomous cousins.

Kingsnakes are small, solitary animals found in a variety of different biomes. As their description implies, they carry no syndrome unlike some other snakes, making them entirely harmless to the average dwarf. Like other snakes, they continuously grow through their entire lives, though notably never reach their full size; they require 60 years to reach 1,500 cm³ (which's only about as big as a guineafowl), but only live up to 30 years.

Kingsnakes can be captured in cage traps and trained into exotic pets. They are born adults and as such can't be fully tamed. While virtually useless for a meat industry, they can be placed in a nest box to lay eggs, being roughly equivalent to ducks in egg-laying prowess.

Some dwarves like kingsnakes for their coloration and their habit of eating other snakes.

Some humans may write Music about how these creatures crawl. It is sometimes thought that they slither, but these humans have shown much foresight in looking at the raws- Without legs, these creatures could only be able to crawl. Good job, humans. 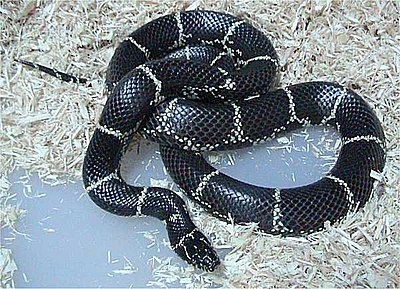 Admired for its habit of eating other snakes.
Retrieved from "https://dwarffortresswiki.org/index.php?title=Kingsnake&oldid=286304"
Categories:
Hidden categories: