A small forest bird known for the distinctive flaps of skin hanging from its face. It is prized for its meat.

Compared to other domestic poultry, turkeys are the largest in size, being a better food source than the likes of chickens. Turkeys take two years to reach their full weight, while the slightly smaller blue peafowl and geese take only one year. They lay the most eggs in average out of all domestic birds (12, compared to the average 10 eggs of the duck and 9 of the guineafowl), making them the best domestic birds for egg production. Having both genders of turkey around allows one to breed them fairly quickly, though framerate can be negatively impacted by plentiful pathing poults. As with other tame animals, if many turkeys are confined in a small area, they can become overcrowded and start fights. Since poults need no food and have no practical utility until mature, they are generally best caged, where they cannot eat FPS by attempting pathing until they are ready for egg laying or slaughter. Putting a couple in a cage in a dining hall gives dwarves who like turkeys happy thoughts, as well.

Wild turkeys can be captured with cage traps. Training them will render them completely tame.

Some dwarves like turkeys for their wattle, their snood and their gobble. 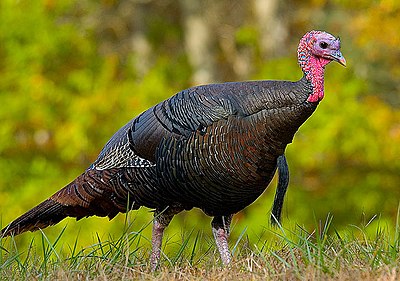 Admired for its gobble.
Retrieved from "https://dwarffortresswiki.org/index.php?title=Turkey&oldid=285974"
Categories:
Hidden category: