A dangerous water monster known for attacking ships at sea.

Giant octopuses inherit the abilities of octopuses, including their ability to squirt ink.

Giant octopuses can act as a replacement shark in moats. They have the advantage of having multiple arms, and are therefore less likely to be hit in a vital area.

Recipe for moat: 1 or more octopus/shark/crocodile/alligator added into a bowl (moat). Fill with water (7/7 for optimal conditions). Add goblins or another topping (victim) of your choice and whisk (mutilate). 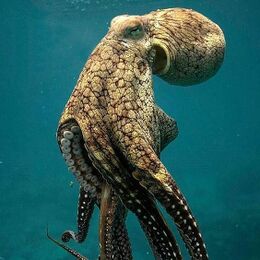 This sea monster is also known as the kraken. It regularly attacks ships (possibly one reason why dwarves never build ships). In some legends, sailors evade this terrifying monster by digging deep underground to an island rather than face the perils of the sea.