A huge person with the head and flippers of a sperm whale.

They are by far the largest of the animal people – half the weight of a fully-grown dragon. This makes taking them on very dangerous, but since they live in the water and are generally not aggressive, you'll be hard-pressed to have a sperm whale man problem – unless you have embarked on an evil ocean, but in that case, you brought that on yourself.

Like sperm whales, they have a 1/101 chance of being born with white skin instead of gray. They are also rarely subject to beaching.

While they can learn and would be able to join civilizations, they never do so, as they are completely aquatic and cannot survive on the surface.

Some dwarves like sperm whale men for their teeth and their vengeful nature. 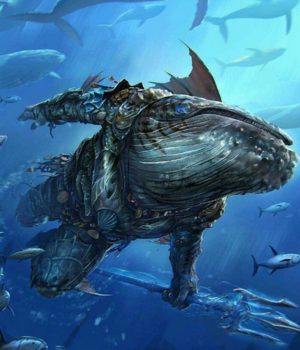 Even the ocean doesn't have enough room for him.
Art by Rudy Siswanto
Retrieved from "https://dwarffortresswiki.org/index.php?title=Sperm_whale_man&oldid=287759"
Categories:
Hidden category: