A legless person with the head and back flippers of a leopard seal.

Leopard seal men are animal people variants of the common leopard seal who can be found in savage arctic oceans. They spawn in groups of 1-5 individuals and while not too aggressive, will fight back if provoked. In terms of size, they are almost four times larger than a dwarf and will overpower an untrained civilian very quickly if angered.

Some dwarves like leopard seal men for their fierce nature.

Leopard seal men are relatively unimportant in the world of Dwarf Fortress, but then along came Bim Silversnarl the Hero of Balance, a demigod leopard seal man adventurer whose journey has bloomed to legendary proportions. A true display of pinniped potential, he built his own settlement and recruited an entourage of loyal honey badger men who unquestionably follow their natural born leader. In his quest to "balance" and abate the overgrown evil in the world, Bim was responsible for the slaughter of over 700 trolls en masse during a visit to the dark fortress. Blood the color of adamantine was spilled in great abundance; the carnage was so unchecked that his iron battle axe and long sword actually wore out from endlessly beating them against troll flesh. Armok would be proud, and on the plus side, lag was reduced considerably. An ☼engraving of Bim Silversnarl☼ was carved in honor of the extraordinary mammal. Leopard seals do indeed have a fierce nature, after all. The video series chronicling his epic adventure can be found here. 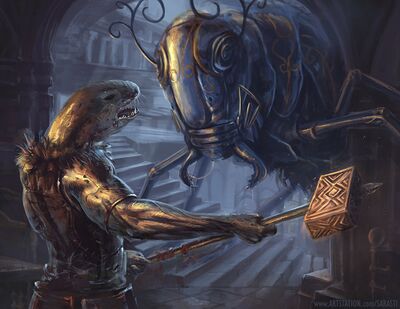