A gigantic monster in the shape of an orca.

Giant orcas are big – really big. Of all the creatures in Dwarf Fortress, only the giant sperm whale is larger. A single specimen can feed a fortress for years and keep bone carvers very busy, but giant orcas appear in groups of 3-9. If that massive bounty isn't enough to motivate your dwarves to leave dry land, you're in luck: giant orcas are also prone to beaching themselves on shore, leaving a corpse ripe for butchering. Giant orcas can prove very valuable to any fort on a savage ocean. Dwarves in a terrifying biome should fear them as well – zombie orcas may crawl up on dry land.

Some dwarves like giant orcas for their coloration and great jumps, though one imagines that they admire both from quite a distance. 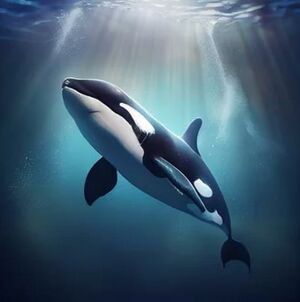 Once accidentally flopped itself onto land and took out three fortresses... in three different biomes... kilometers apart from each other.
Art by Chernyakov Aleksandr
Retrieved from "https://dwarffortresswiki.org/index.php?title=Giant_orca&oldid=287709"
Categories:
Hidden category: