A large monster in the shape of a crab.

As its name suggests, the giant crab is an especially large version of the crab and can be found on savage beaches, where they spawn one at a time. Standing 32 times larger than a normal crab, these creatures are large enough to not be intimidated by the presence of dwarves and will fight if provoked, which may be a fatal encounter for a civilian who just happened to be on its path. However, they should not prove to be a threat to a crossbow-wielding hunter or a half-competent military squad.

Like their smaller counterparts, all giant crabs possess Legendary skill in climbing as well as blue-colored blood. Unlike normal crabs, however, they are tamable creatures with the standard high pet value of giant animals, meaning they can be freely used as valuable pets or in the meat industry. Giant crabs are considered exotic mounts, so you may see elves riding them into battle in the event of a siege.

Some dwarves like giant crabs for their pincers and their sideways walk.

As with most creatures, the best way to defeat the giant enemy crab is to attack its weak point for massive damage. 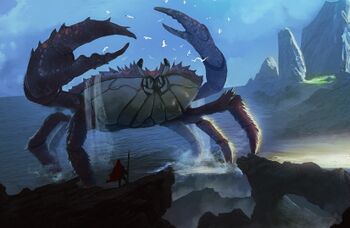