A small person with a head bearing ten tentacles.

Squid men are animal people versions of the common squid, who can be found in savage oceans. They spawn in groups of 5-10 individuals and are generally content to keep to themselves. In terms of size, they are a little over half the weight of the average dwarf.

Testing in the arena (5 undead squid men VS. 5 human swordsmen) has shown that one re-animated squid man, in addition to being able to travel on land, has the potential to quickly become an army of re-animated body parts, as they have twelve limbs and eight sets of hands, all of which are theoretically capable of holding a weapon or item.

Some dwarves like squid men for their ability to spray ink. 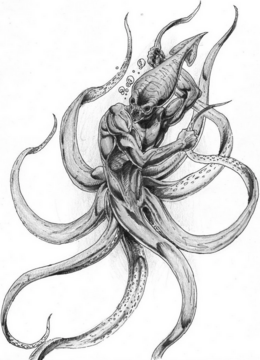 Does this look unsure to you?!
Art by skorp77

The squid man is considered the most sophisticated of the aquatic animal people, as it has been known to use tools and play instruments, the clarinet being most commonly used. It has also been observed to have a strange aversion to sponge men. More research is necessary to determine the cause of this.

Reports have also surfaced of squid man children competing deep below the waves for territory using their ink despite being born into adulthood. It is still a mystery among Dwarven biologists as to how and why such events are coordinated. However, one theory suggests they are training for their ongoing war with the octopus men.