A colorful person with the head and shell of a moon snail.

Moon snail men are animal people variants of the common moon snail, who can inhabit savage temperate oceans. They spawn in groups of 1-3 individuals and are generally content to keep to themselves, and may not encounter your fortress at all due to being purely aquatic. In terms of size, they are a little over half the weight of the average dwarf.

Like other non-amphibious, aquatic animal people, moon snail men cannot currently join civilizations or appear as visitors and they are not playable in adventurer mode.

Some dwarves like moon snail men for their predatory nature and their striking coloration. 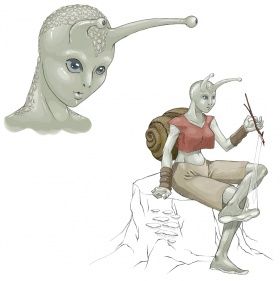