A large nocturnal bottom-dwelling fish. It is sluggish in movement and found in near-tropical shores.

Nurse sharks are cartilaginous fish that can be found in temperate oceans. At 2.5 times the size of an average dwarf, they are fairly large fish and produce a decent amount of meat when butchered. As fully-sized creatures, they can't be fished by fisherdwarves, but can be caught with a drowning chamber. An infant nurse shark is called a nurse shark pup.

Being cartilaginous, nurse sharks won't give bones if butchered (though they'll still provide a skull). 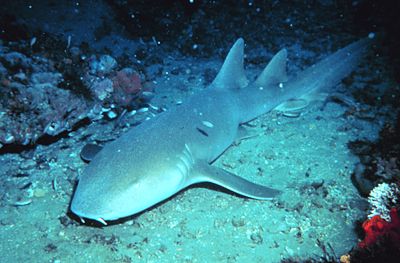 Admired for its tenacity.
Retrieved from "https://dwarffortresswiki.org/index.php?title=Nurse_shark&oldid=287736"
Categories:
Hidden category: