A person with an octopus in place of a head.

Octopus men are animal people variants of the common octopus who can be found in savage oceans. They spawn in groups of 1-5 individuals and are generally content to keep to themselves. In terms of size, they are a little over half the weight of the average dwarf.

Some dwarves like octopus men for their many arms and their intelligence. 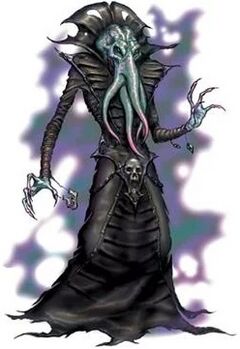 You don't wanna know where the beak is.

Octopus men have been known to take over the bodies of Spider-men, deeming themselves to have superior intellect compared to the Spider-men.

Octopus men are a surprisingly unscrupulous race; they often feud with squid men over territory and are known to steal precious materials from them. In rare instances, squid man singers have even been kidnapped from their undersea homes and forced to perform for octopus men. Despite this, there is evidence that octopus men and squid men were on equal terms in the distant past.

Octopus men occasionally will don a shirt, coat, and trousers and marry a human, usually living together in the suburbs with children. Despite their obvious differences, members of the civilization rarely suspect anything, with the notable exceptions of chefs. Such chefs will form a grudge against the octopus man and frequently seek vengeance armed with a meat cleaver.