A huge monster in the form of a horseshoe crab.

Unlike their smaller cousins, giant horseshoe crabs make for poor training partners in adventure mode, being too flimsy to last long as punching bags, too large for an unskilled wrestler to restrain, and massive enough that their pushes will crush limbs and mangle joints if they connect. 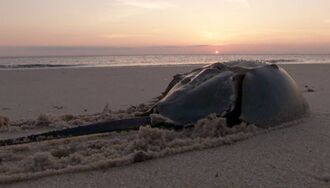 You don't want to see the ugliness underneath.
Photographed by PBS
Retrieved from "https://dwarffortresswiki.org/index.php?title=Giant_horseshoe_crab&oldid=287701"
Categories:
Hidden category: