Octopuses (the correct in-game term) are a species of marine creature who may be found in any ocean biome. Only as large as a cat, they are a negligible presence to dwarves and provide few returns when butchered. Unlike squids, octopuses aren't vermin and can't be fished by fisherdwarves, but can be caught with the use of a drowning chamber. They possess copper-based blue blood instead of a usual dark red.

The most notable ability of the octopus is being able to squirt ink when threatened (or when controlled in the arena by using x-a). This has the effect of hiding the octopus from view (due to its interaction token), as well as preventing it from being viewed or listed in the units menu. Octopus ink turns water a dark grey, similar to other contaminants. When controlling another creature in adventurer mode, the You've spotted an octopus! message will appear, while in fortress mode you'll see An octopus has sprung from ambush! instead. Due to their tiny size, however, you shouldn't have to worry about it.

Some dwarves like octopuses for their many arms and their intelligence. 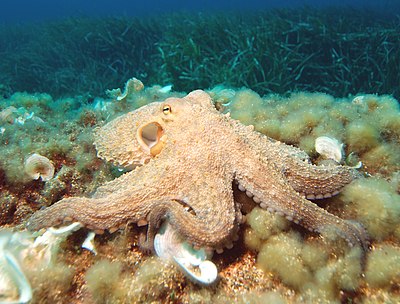 Admired for its many arms.
Retrieved from "https://dwarffortresswiki.org/index.php?title=Octopus&oldid=287490"
Categories:
Hidden category: