A small bat-like creature with the head of an insect. It is found deep underground.

Bugbats are small, flying creatures who inhabit the second and third layers of caverns, appearing in swarms ranging from 5-15 individuals. Only half the size of a kobold, these weird-looking critters will spend their time flying through the underground, fleeing from dwarves who approach them; they are benign and will rarely fight back if confronted. All bugbats are born with Legendary skill in climbing.

Bugbats can be captured in cage traps and trained into low-value pets. They are prolific breeders and appear in large numbers, meaning it's easy to set up a bugbat farm relatively quickly. They reach their full adult size at 2 years of age, and should be butchered by then for a maximum amount of returns.

Some dwarves like bugbats for their freakish insect heads. 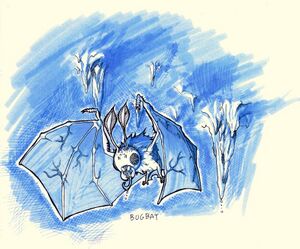