Giant aye-ayes are the super-sized counterpart to the common aye-aye found in tropical broadleaf forests. Giant aye-ayes are a little larger than grizzly bears, but not as aggressive as those, instead fleeing any conflict. Only appearing rarely in a small subset of biomes, giant aye-ayes are among the more elusive animals in Dwarf Fortress. Due to their size, they yield a decent amount of returns when butchered, but the aforementioned rarity can make it difficult to obtain a breeding pair for a sustainable meat production.

Giant aye-ayes are exotic mounts, and can rarely be ridden by elves in a siege.

Some dwarves like giant aye-ayes for their interesting fingers. 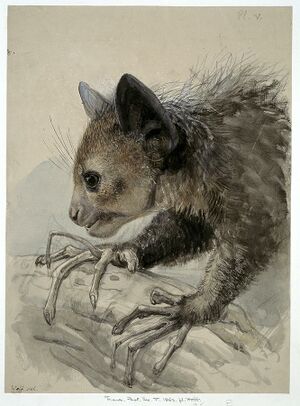 "Their fingers are like tree trunks!" - A dwarf's final words after encountering this very creature.
Art by Science Photo Library
Retrieved from "https://dwarffortresswiki.org/index.php?title=Giant_aye-aye&oldid=285292"
Categories:
Hidden category: